We never truly realised that we were in the ‘Rat race’ until we had left it. Both of us having been in Corporate land all of our working lives, well over 30 years, Alison in Banking and Mike in Supermarketing, both in and around the London area. There was no clear and obvious light bulb moment leading to our decision to cut the shackles and break free from this daily grind. However the physicality of Mike’s career over the years was beginning to take its toll on his knee joints and the ever changing & increasingly more antisocial shifts resulting in poor diet and a terrible work life balance. An escape plan was hatched.

A love of travel and a natural affinity with good customer service along with a slow burning interest in B&B’s led us down a path towards the business of hospitality. It took us 7 years to create the circumstances that would allow us to affordably ‘manage’ our way out of our long standing jobs into the great unknown.  Initially Mike gave up salaried work first to run the business and a few years later Alison left the bank to work nearer the business in the NHS to keep a steady income coming in enabling us to build the business up.

Both of us had great customer service & management backgrounds, Alison had been a business banker and brought her financial skills whilst Mike had food hygiene and cafe training. (We both knew how to make a bed!)

Prepared to move anywhere in the Country we searched for the property to start our business in. Not wealthy by any means we wanted to find a property that was big enough, somewhere that people wanted to go to and most importantly somewhere a little special, a character in its own right.  The ‘it’ factor if you will. 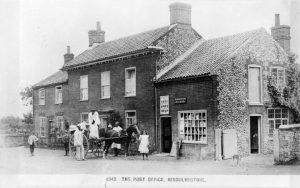 Eventually in deepest North Norfolk we found a reasonably sized house which it would seem nobody wanted as it had laid unsold for well over two years.

A 250yr old Norfolk flint Cottage which used to be the village Bakery It required some serious renovation having not been redecorated since the 1970’s and several structural issues.

The Old Bakery as it turns out is a very special place indeed, more than we could ever have known or comprehended.  We have the deeds dating back to 1746 which have enabled us to research a fairly detailed history from then onward. As a result we have established that extraordinarily Mike has family connections taking him directly to the family that built the windmill & turned the house into a Bakery & village stores in the 1840’s. Of course for the full intriguing history you’ll need to come and stay so you can read ‘The Book’!

The house was saved from dereliction by the previous owner who was a vicar and bought the place in the 1970’s using it first as a retreat for vicars then later, after retiring, as a healing ministry. Doing much of the renovations himself he breathed new life into the house and gardens too. He even added a small chapel as well. He established the core layout of the garden that we have today and used it’s calming influence for several decades to counsel & help heal those that were suffering anguish in one way or another. The retreat appeared on an ITV Sunday worship programme and over the years many of those helped joined the team and helped others. We invited the majority of these helpers for an afternoon tea reunion a few years ago. 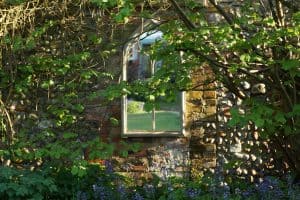 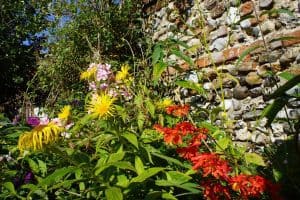 e garden is surrounded by a lovely flint wall which in places is hundreds of years old and feels quite monastic.

Where the ministry counseled people in the garden Alison, a qualified coach, now uses the garden to coach and exactly as they also used to do Alison uses the North Norfolk coa 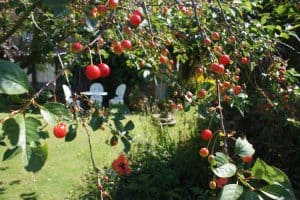 As the garden is south facing it holds in the sun and it’s solid walls are a fortress of peace & tranquility with just the bird song as a backing track.

As no more than temporary custodians of this house, this garden we feel a weight of responsibility in maintaining the very special nature of this place. Every now and again we find 5 minutes to stop and literally smell the roses. We look around at the flowers blooming, our little coastal garden where we share an evening with friends and guests, the pine Quilting Studio used for our quilt retreats, the ‘wild  garden’ (a great story telling corner) and the patios where a glass of fine wine is enjoyed as the long summer evenings turn slowly towards the bronze of autumn. 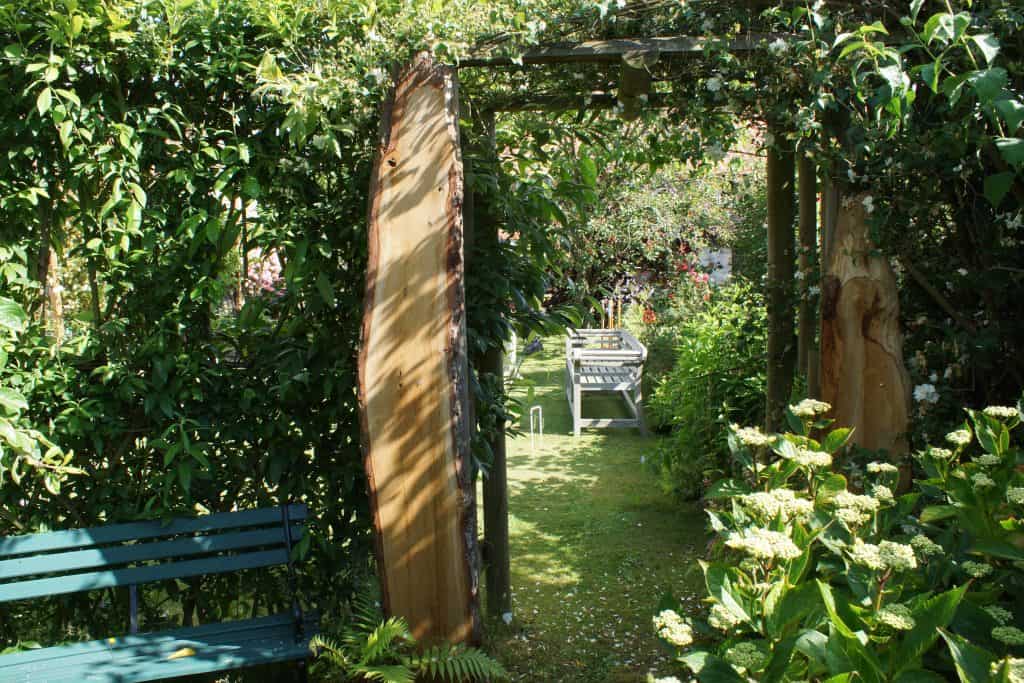 The kiss of the sun for pardon,

the song of the birds for mirth.

One is nearest God’s Heart in a garden

Than anywhere else on earth. 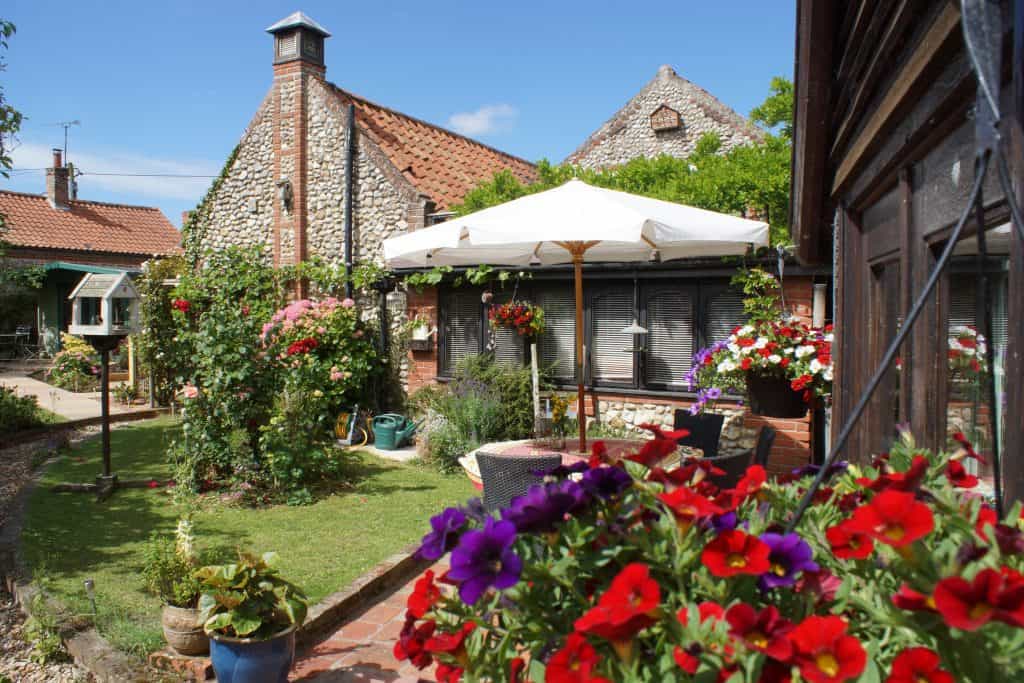 So here we are offering our little bit of heaven to those that need a little break a chance to recharge those batteries indeed in some cases in need of a little solace. Even those who have only come to stay because of a wedding often leave citing how calmed they feel, that is the magic that is The Old Bakery, Hindolveston.

We look back now and see, with hindsight, that we were indeed in the ‘Rat race’ and whilst we thought we were happy we now understand what happiness is. Don’t be fooled into thinking hospitality is easy, it’s still hard work and has it’s monotonous bits, hoovering seemingly every 5 minutes, washing & changing bed linen constantly and trying to squeeze in the shopping runs. Then you meet the people, the guests, the artisan food producers and the local villagers, you talk, you slow down a little, you go at Norfolk’s pace because Norfolk will not speed up for you.

A few miles away amongst a scattering of bright red poppies there is a milestone that sums up Norfolk’s contempt for the ‘fast life’. Rather than state how many miles TO London it simply states how many miles that you have made it away FROM London.   Perfick….. 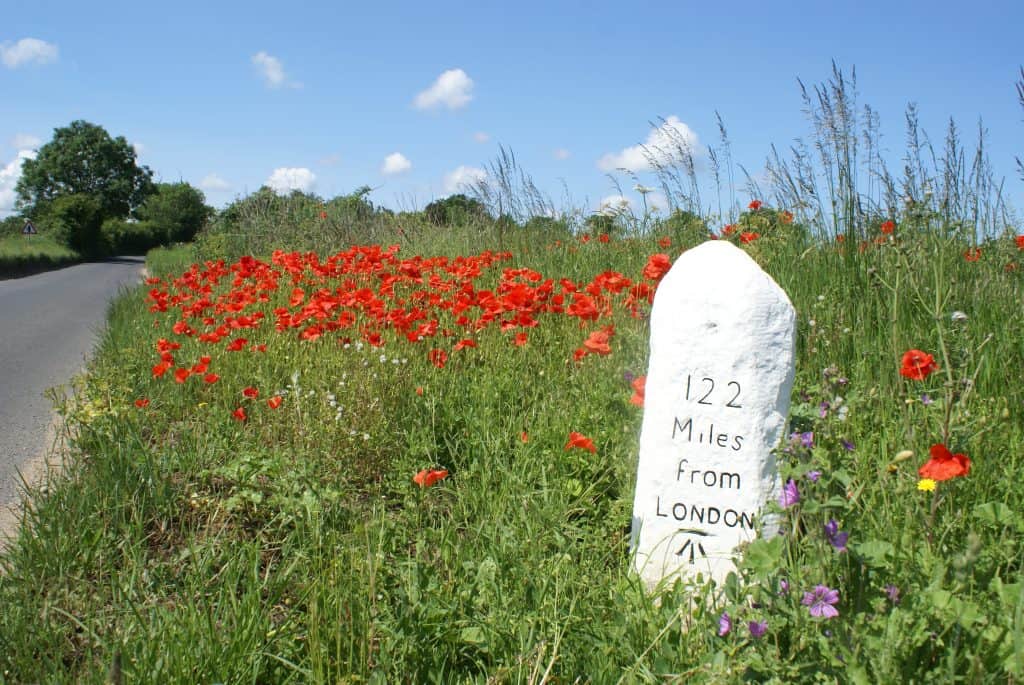 Our 5th stay (we think!). Fabulous as ever, such wonderful hosts. Thank you so much.

Another wonderful stay. Thank you so much x