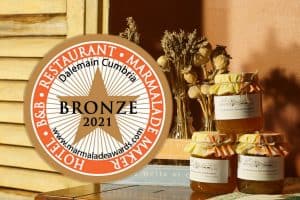 We are very proud to announce that our Seville Orange Breakfast Marmalade has won a coveted Bronze Award in the World Marmalade Awards 2021.

The awards are part sponsored by Fortnum & Masons and hosted by Dalemain  Marmalade Festival in Cumbria. Over 3,000 jars were entered into the 2021 Awards. Entrants sent them from over 30 countries including Kuwait, Honduras, Brazil, Australia, the Channel Islands and Zambia!

We entered two of our home-made marmalade this year. It is our main 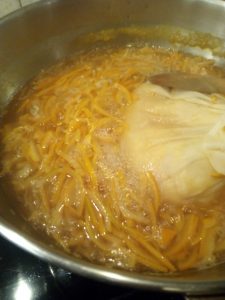 ‘Old Bakery’ breakfast marmalade that has been awarded the Bronze Award in the Hotel, Restaurant and B&B category . It is this marmalade that we serve to our guests daily. Every January we spend a few weeks making about 70 jars of it. We serve the Marmalade at the table and also sell it to those that wish to buy them from our shop in the porch. 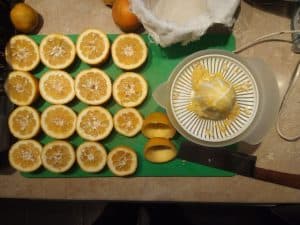 Our second entry was our ‘Pink Grapefruit & Cranberry Marmalade’ which was Commended in the ‘Interesting Additions’ category which we are also highly delighted with.

We have developed a range of Marmalade; Lemon & Lime, Lemon, Pink Grapefruit, St.Clements (a mix of oranges & lemons) and of course the two above. In all we make somewhere near 150 jars a year and then there’s the jams and the chutneys too.

Not forgetting our Seville Orange & Chocolate Marmalade which we entered into the Awards last year and received a Commendation! 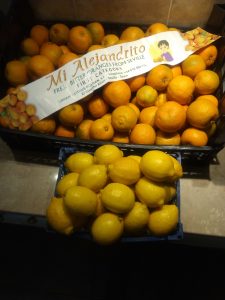 We aim to increase the quantity that we make of our Bronze awarded Seville Orange Marmalade next January. This should hopefully mean that we will have enough to be able to sell them throughout the year. Each year guests and locals have been buying increasing amounts. Just one more  reason to come and stay at The Old Bakery B&B!

Click HERE for B&B details or HERE for our Self Catering Cottage details. 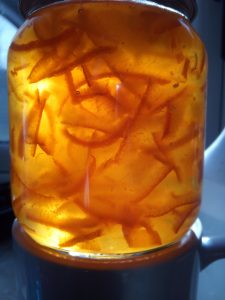 The awards raise funds for charity and to date the Dalemain World’s Original Marmalade Awards & Festival have raised over £250,000 for palliative care, with Hospice at Home, Carlisle & North Lakeland being the main beneficiary.

Thank you for a lovely stay. Excellent. Wonderful breakfast.

Thank you! We have been so spoilt. Food amazing. Every detail thought of in the room. A piece of heaven!