Half way through January we closed for two weeks to allow us to catch up on some maintenance tasks. One of these tasks was to re-upholster two armchairs that are in one of our guest rooms. My idea; which as time went on, we came to regret. A challenge yes, but we were not too daunted as our daughter Claire had taught herself how to do this via Youtube! And she did a brilliant job too.

So after checking with Claire, now our upholstery Guru, we gave ourselves a weekend to ‘knock out’ the two armchairs, easypeasy.

It was great at the begining Alison and Claire, full of enthusiasm, selected and bought the material. I realising that Alison was losing her valuable weekend even wrote to Steve Wright Sunday love songs to try to dedicate a record to her. I guess I thought it would be sweet, the two of us would be working away, ‘together’, and Steve would read out my dedication and Alison’s little jaw would drop and we’d look at each other and she’d go “awwwwwe”. Then off we’d go straight onto the second chair. All very Waltons’ish.

Reality however quickly reared her ugly head & soon slapped us in the face with it’s wet flannel. 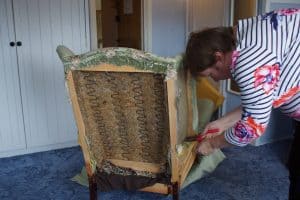 From the very start we fought every staple and the material that we were trying to remove held on with obstinate determination. We had to keep the old material because it was to be used as the template for the new replacement sections.

In fact the only easy thing was removing the loose ‘fitted’ covers that had been hiding the original horrid green fabric. When we first decided to get chairs for this room we had looked at all sorts of options but I had always wanted small armchairs, I just thought that they’d work best. However the problem was always going to be how to squeeze them into the room as the corridor to it is only 2′ wide.

Then one day at the local auction I saw these two forlorn little armchairs begging me to buy them. I knew that they were the ones and I prepared to spend big to get them. The Auctioneer started at £30, I played it cool and waited for someone else to start. Nobody was interested, he went down to £20, then £10….. Then £5! That was it I bid and seconds later I had two armchairs for £2.50 each! Bonkers.

Unfortunately the only way that I could get them into the room was to remove a window and climb up a ladder with each one of them on my back, turtle style. 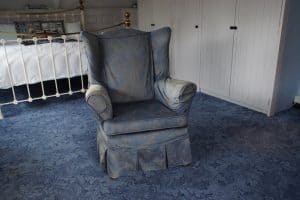 However 6 years later the temporary covers were faded & baggy and the green colour below was outrageously dated so we figured we could re-upholster them. Well the weekend seemed to be flying past and by Sunday morning I was still struggling to remove the second chair’s old fabric. We were quickly coming to the realisation that this was going to be a long job and even Mr Wright on his Sunday bleeding love songs had not read my dedication.

The enthusiasm was melting away and then as we listened to Steve’s dulcet tones on the radio he mentioned first my name then Alison’s as he read out my dedication and joked about us doing the upholstery….

Alison’s little jaw dropped and we looked at each other and she went “awwwwwe”. Then he awarded us the weeks Flowers & Chocolates!  I guess he felt we MUST be in love if we spend a Sunday re-upholstering together.

Our mood lifted and we strived on with a renewed zeal and  THREE DAYS later the job was done, a delivery of flowers & chocolates arrived from Radio 2 and Alison forgave me for having the stupid idea in the first place. 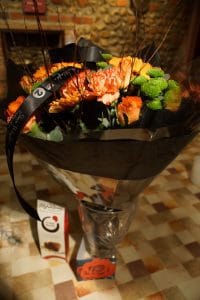 Oh and we finished the chairs…..  (eventually)…. 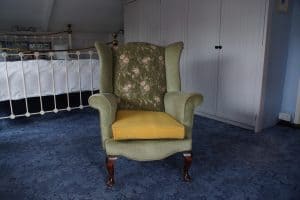 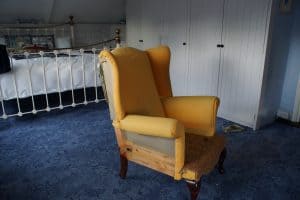 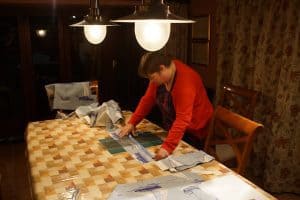 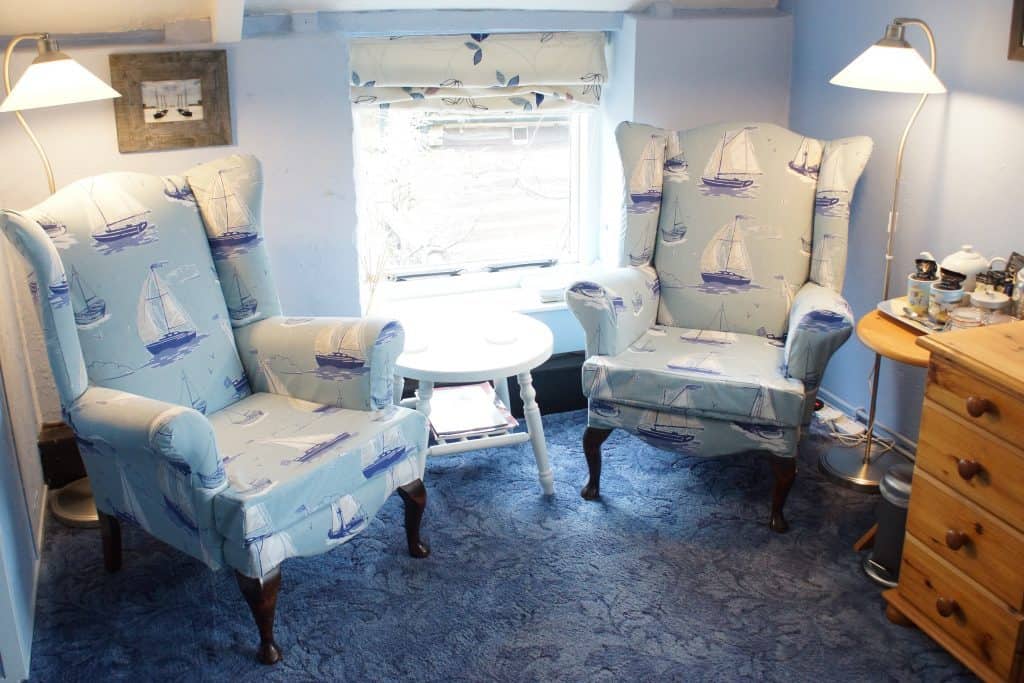 Absolutely the best B&B ever! Warm, welcoming and so comfortable – breakfast heaven. Thanks – we’ll be back!