Our coastal garden started sometime in early March with my neighbour turning up at the doorstep in charge of a wheelbarrow full of grasses.

It didn’t end until yesterday when I finally planted the last item which, although not one of their grasses, was indeed a specimen grass. And thus our old unused corner of the garden had new life breathed into her and our Coastal garden was complete.

A very long time ago Alison & I had a snippet of an idea, we thought as the garden is shared with our holiday guests, B&B guests and us wouldn’t it be a nice idea to invite everyone to join us for pizza say each Friday. Pizza Fridays, Hmmm sounds good now all we needed was a garden Pizza Oven. Well one thought led to another and soon we had developed this simple idea into a full coastal garden concept with Beach Hut, Wood fired oven, decking and allsorts.

We bounced the idea off several friends & relatives and the response wasn’t very enthusiastic invoking one friend to ask “What do you want to do a bloody stupid thing like that for?” He knows us well and we have indeed ‘done’ bloody stupid things like ‘that’ in the past, we have history as it were. For example the kids never liked bringing their friends home because we had decorated our hall in a coastal theme. It wasn’t the quality wall paper of yachts or indeed my photos of lighthouses adorning said walls. No, I think that they balked a little at the full-sized used life-buoy we had bought in Lyme Regis and having driven the whole journey home with it tied on the back of our car we then hung it in the stairwell. That wasn’t the worst in their eyes, for I feel that they never quite understood why we had a real, beach combed bit of old trawler fishing net hanging above their heads as they went upstairs, let alone why we thought it a ‘thing’ to fill it with papier-mâché lobsters, crabs and fish. As I said, we have ‘history’. (Changing Rooms & Linda Barker had a lot to answer for)!

Unperturbed we continued our quest to create said coastal garden and found our legitimisation when visiting Geoff Hamilton’s Barnsdale Gardens and there it was, our ‘vision’, a proper coastal garden with beach hut ‘n all!

Now it has to be said that the one voice of approval had come from our neighbours, Neil & Julie who were full of enthusiasm for the idea and it was Neil that delivered their surplus grasses thus forcing me to make a start on a garden we had talked about but were likely never going to find the time to create.

We had Quilters retreats booked in, Bird watching tours, plus usual guests, the allotment needed preparing, deep cleans in the B&B, repairs in the holiday cottage to do and the rest of the garden to sort out. Yet sitting on our lawn was our neighbours wheelbarrow full of specimen grasses. “I’ll just plant those quickly and get his wheelbarrow back to him”, I thought to myself. Not that easy my friends…..

To plant the grasses I had to move the existing plants. They in turn couldn’t be moved until I had created a new flower bed to take them and which would form the boundary to the new garden. This all done I sat back and thought we can’t have a random flower bed sticking out into the middle of the garden, it just looked odd. So I decided as it was still March and we were in a heat wave (now known to be the hottest Spring since records began) this would be a good time to kill off the area of lawn that would be covered in our beach shingle. This done, I thought I might as well just lay the weed suppression material but then that looked odd so I thought I’ll just knock up the decking. HA! I reckoned that would just take a day, after all I already had all the decking which I bought at a bargain price in the local auction.

I had no clue whatsoever about building decking, apparently you need joists, decking screws (hundreds of them!), something called coach-bolts and even more decking. A week later with timbers reclaimed from a wall that I had removed within the house previously and after several YouTube tutorials we had decking. 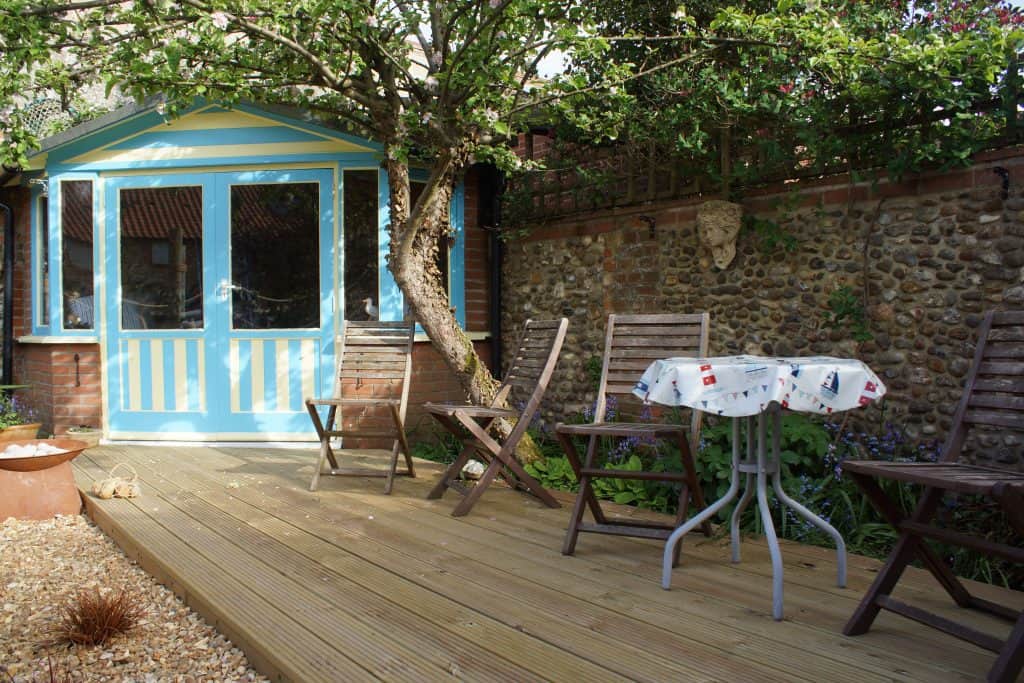 We wanted seats around a fire pit and spent an age researching gabions (metal cages filled with stones often found protecting dunes or motorway embankments). They take a lot of stones to fill them and on one trip from the supplier I could have sworn that the underside of my car was just millimetres from scraping the white lines off the road! 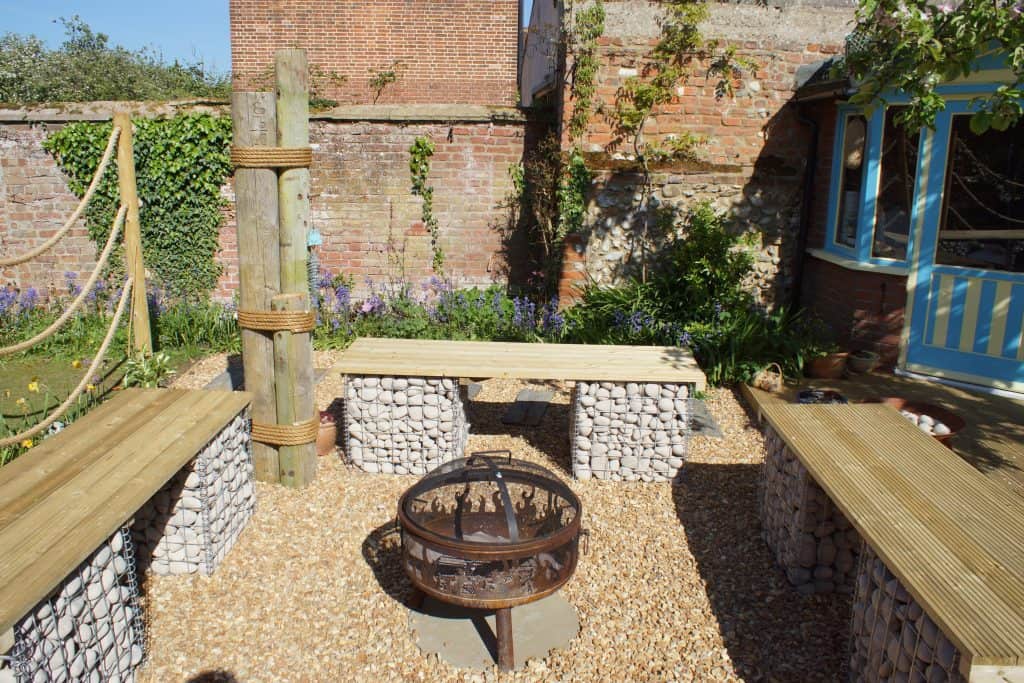 On one of my trips to the timber yard for more decking planks, which by the way were over 12′ long AND I still managed to fit them into the Toyota Previa, all doors closed!! Not many cars can do that. Anyway, on one of my trips I spotted a couple of old telegraph poles. Alison took a little persuading but in the end we bought a second hand telegraph pole for £45 which the timber yard cut into three different sized lengths and I planted into the ground to look like quayside piles. As I said, we have history….

The whole area still looked unfinished and I realised that the ‘beach’ was required and so I ordered a lorry full of shingle and spent another day moving it from the road across and to the far corner of the garden. All the time working against the effects of global warming as March & April were just beautiful sweltering sunshine.

We searched the internet for a wood fired oven that was big enough to do a good job but affordable too, they are very expensive and whilst we had thought about making a clay one ourselves their shelf life is not very good, often cracking within a year or so. Finally we found one we really liked and it turned out that the sole importer and supplier for the UK was just 30 minutes away from us, so we went and bought it from them with a good discount because we were so near for delivery. 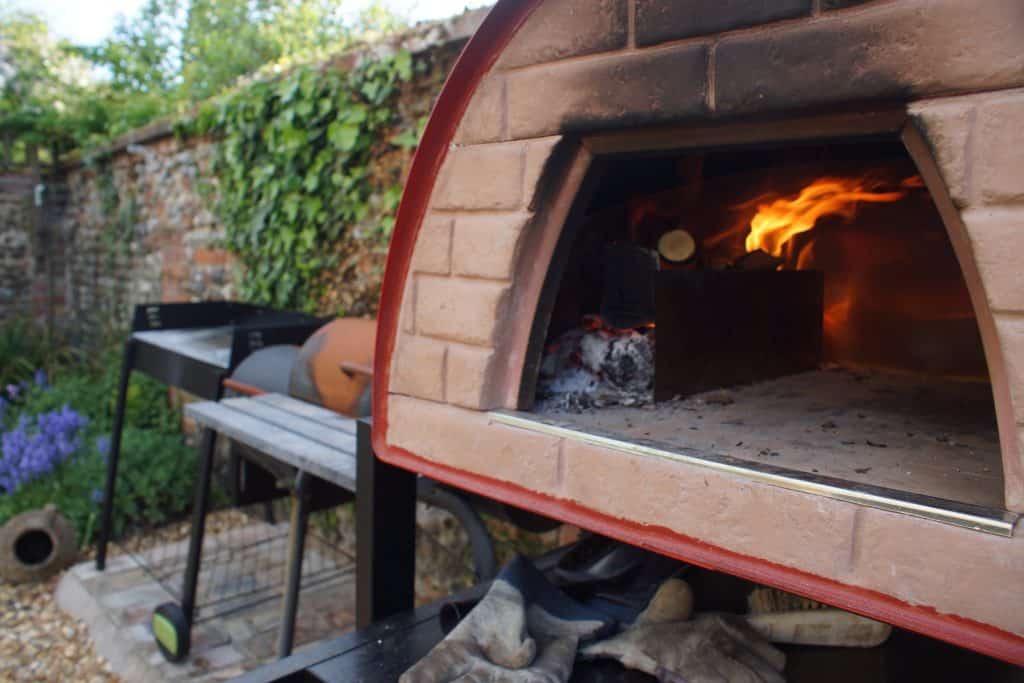 We now had most features on our wish list but one of the key things that we wanted was to have this garden clearly separated from the main garden but not completely hidden. We wanted the two areas to be separated by rope swags hanging from upright poles (to keep the nautical feel) which would eventually have Clematis and Passion fruit climbers hanging from them. It just so happens that our friends & neighbours, Neil & Julie who supplied the grass in the first place own & run The Traditional Rope Company and had actually supplied Geoff Hamilton’s Barnsdale gardens with the rope for their coastal garden that had originally inspired us!

With their help we installed the rope swag division and Neil created superb knots for a truly professional finish. I would strongly advise you to buy all your string and rope requirements from them, they will arrange delivery. Also if you ever decide to put rope swags in yourself seek their advice because if done incorrectly you could find that the rope will snap your upright posts. 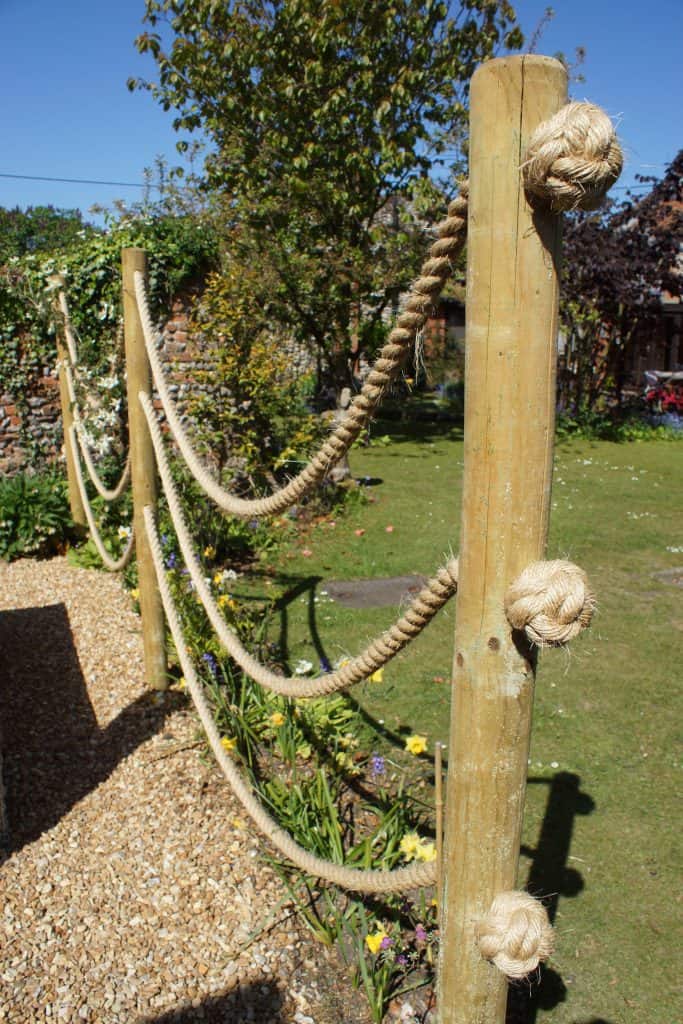 We are still experimenting with the Pizzas, we have had some cock-ups but many wonderful Pizzas, far better than any takeaway, with the exceptions of those with wood fired ovens. 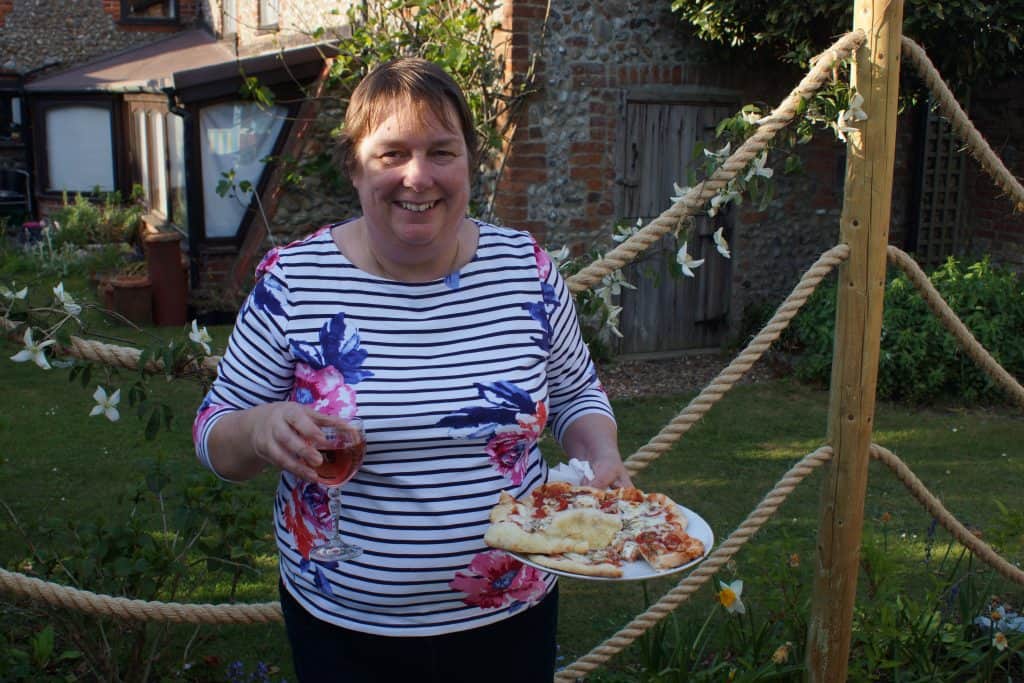 We had painted our Summer House in bright Beach hut colours a year ago and it has stood out like a saw thumb in the old country style garden. Some may say that it still does! We were given some cane chairs but sadly the cushion material had split having been sun bleached and so Alison found a little place that re-upholstered them for us in material of our choice representing deckchair material. 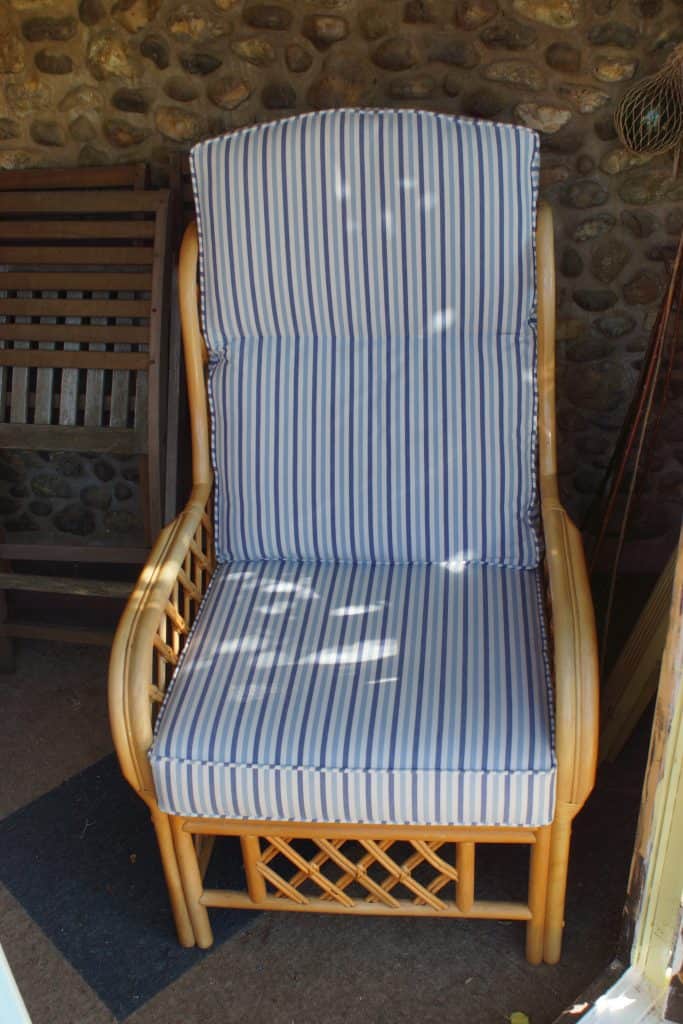 A final touch was to put up brackets around the walls of the garden to hang the multitude of Ikea lanterns that I had hoarded, or ‘accumulated’ over the years. I don’t know why, perhaps it’s because they seemed such jolly good value but it is a rare day that I visit an Ikea store and don’t leave with at least one Ikea lantern. I also placed hooks in the summer house to store them away on rainy days, these are half of them…. 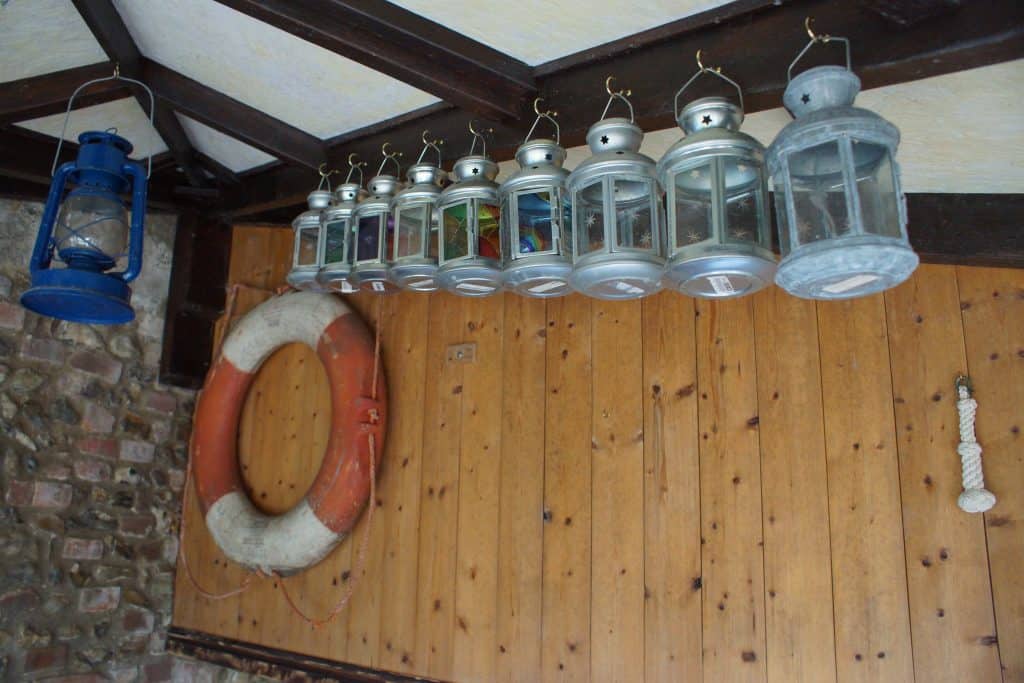 Yes that is our Lifebouy from our previous coastal hall.

There are far more tales to be told regarding the making of this garden including how we got lost one Sunday (in Norfolk) and stumbled upon the most extraordinary nursery in the middle of absolutely nowhere. Also of my parents attempt to purchase a film prop Seagull and how my Mother-in-law & daughter stopped me from buying a full sized fibreglass Bottlenosed Dolphin from the Fakenham Market.   As I said, we have history….

Here is a gallery of our efforts in the garden…. 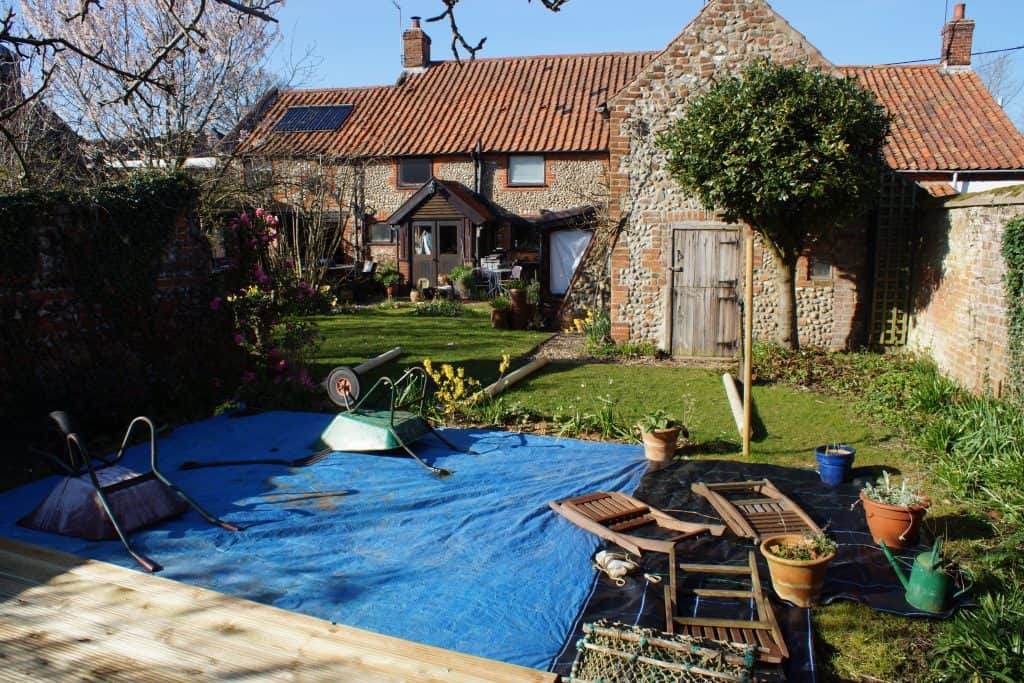 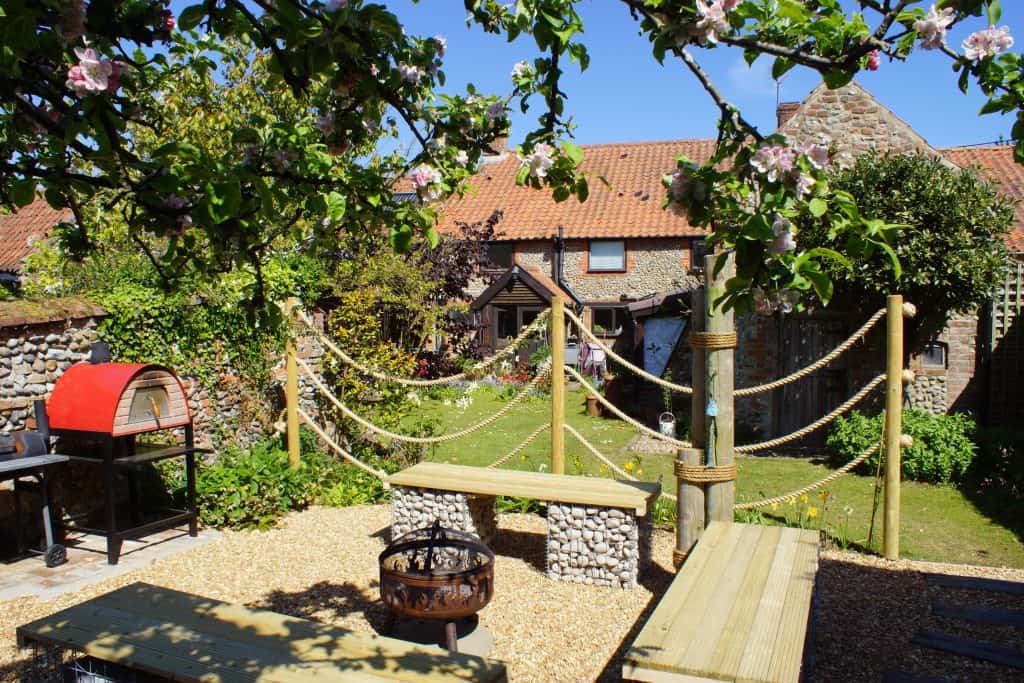 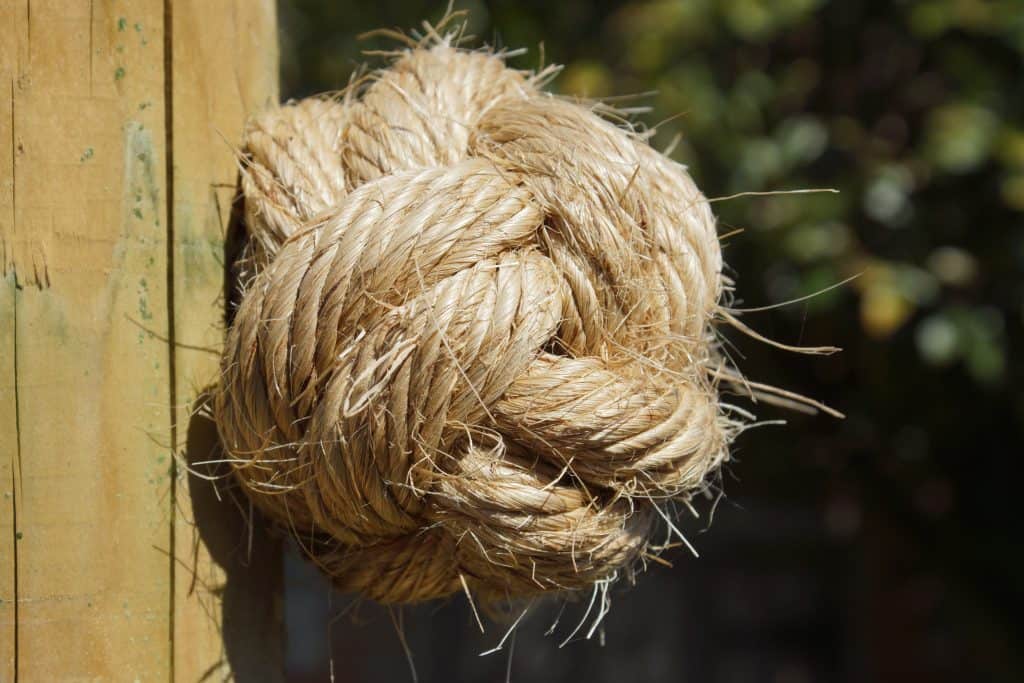 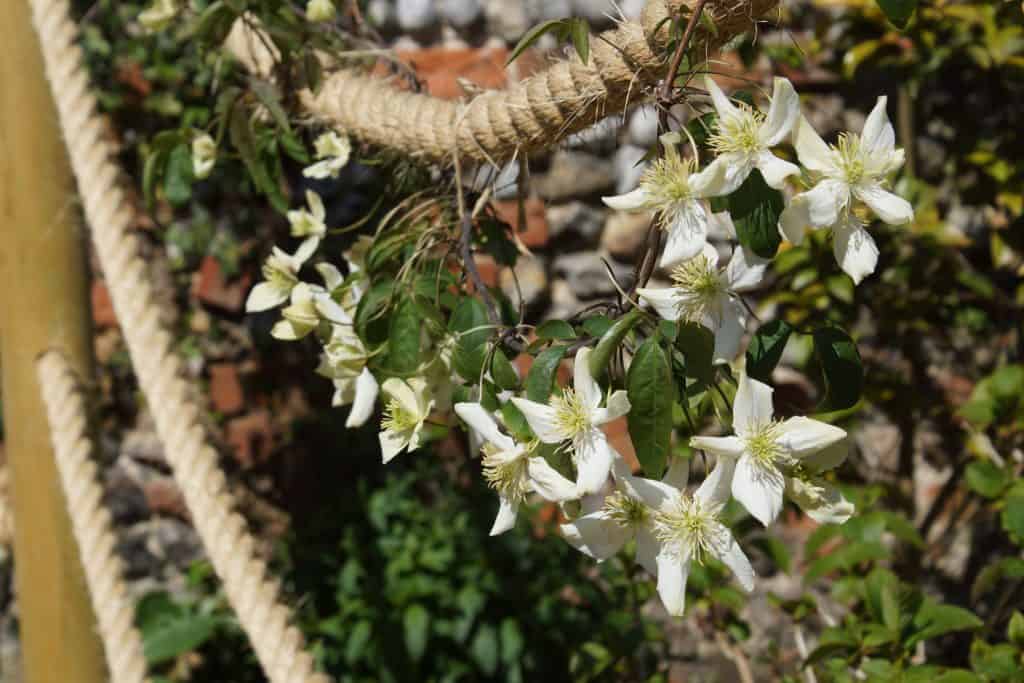 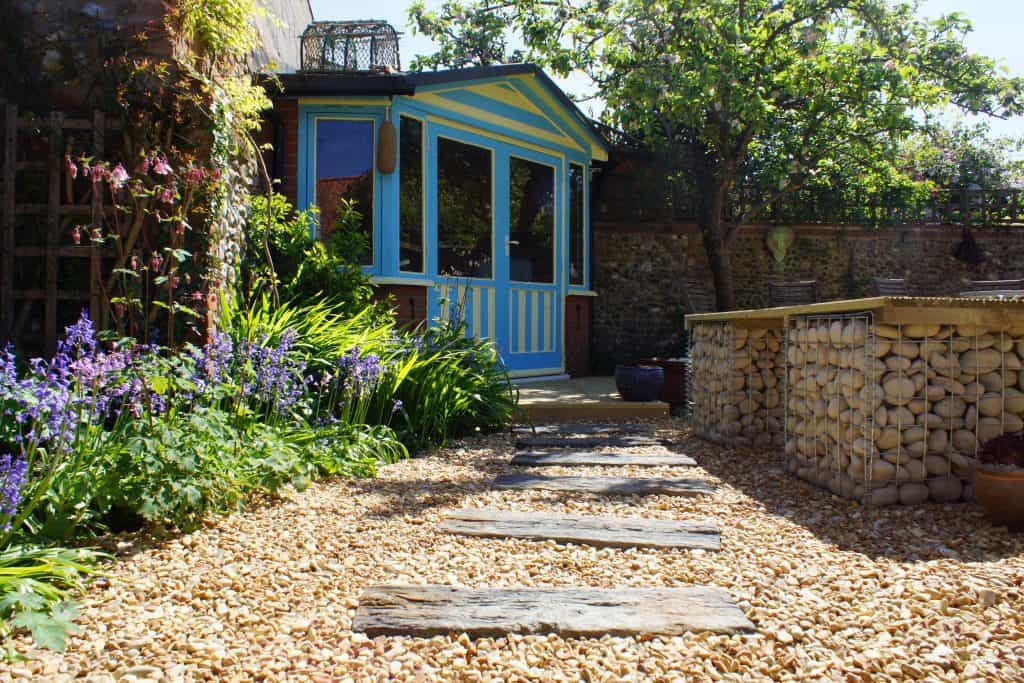 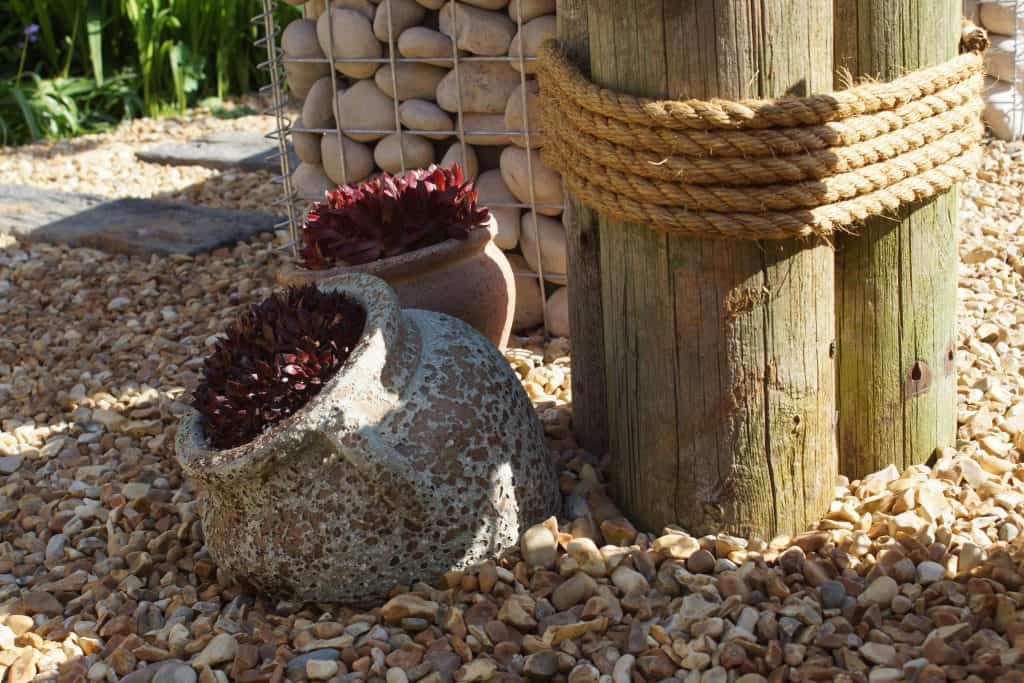 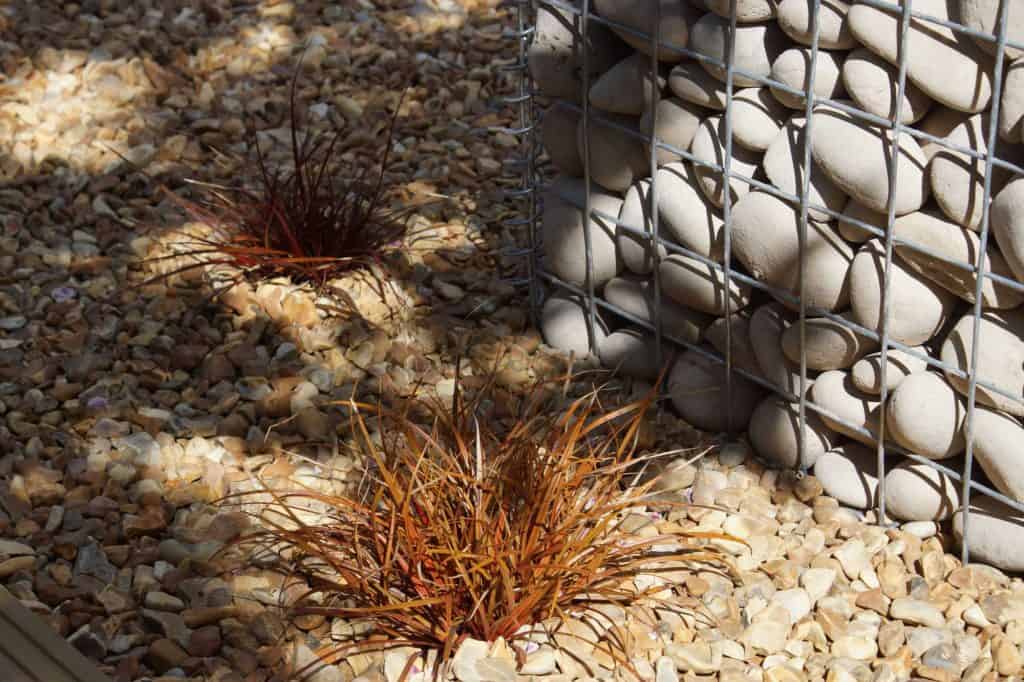 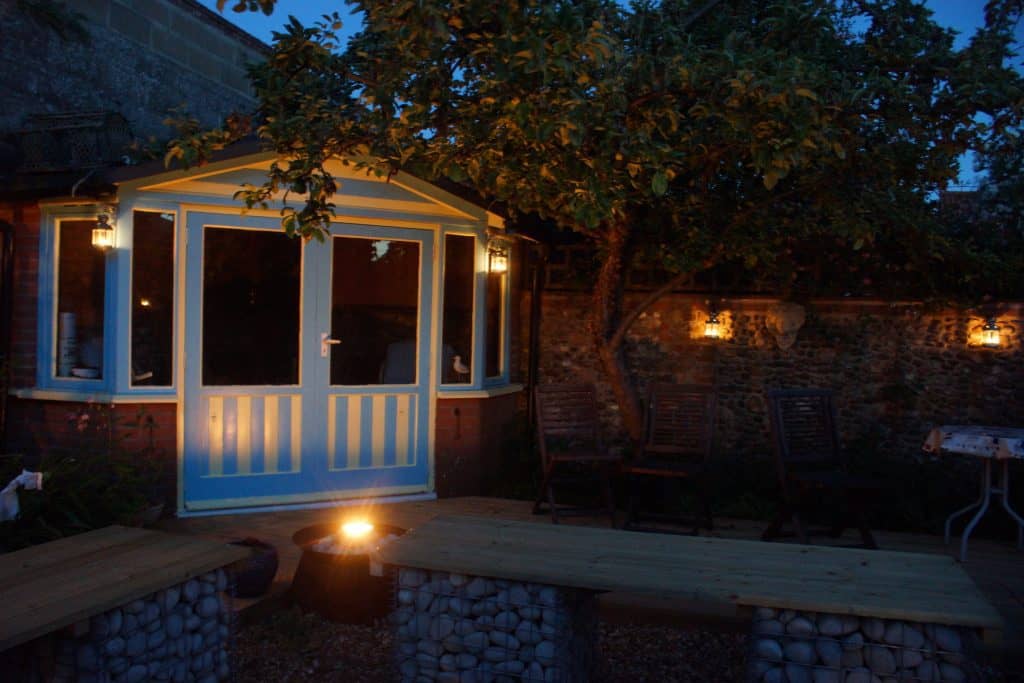 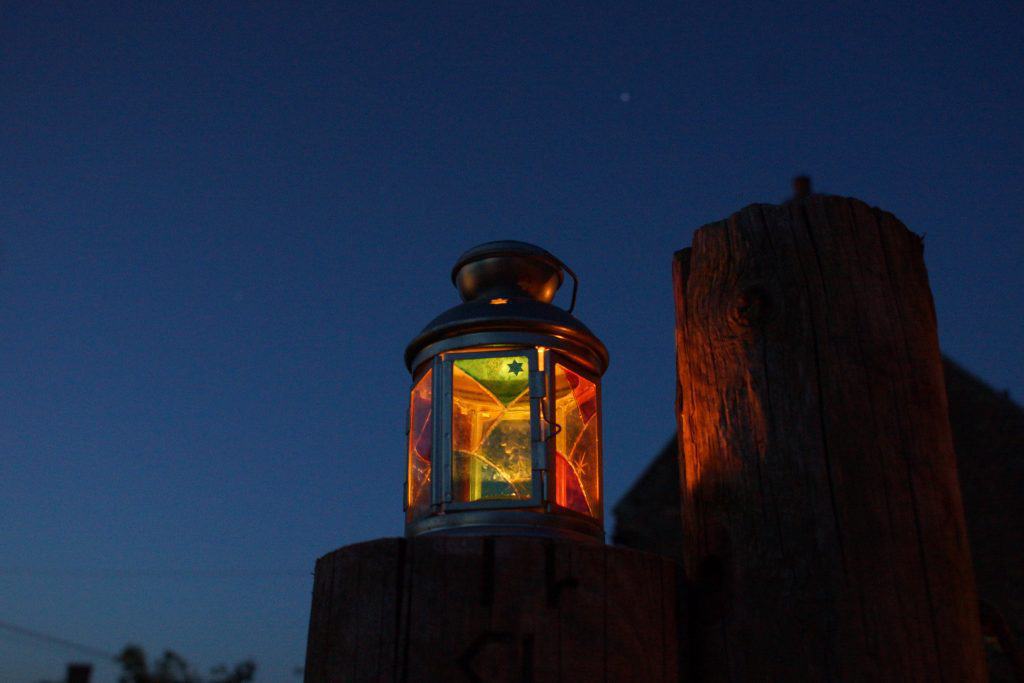 My daughter and I used to lay flat on our backs on the lawn and watch the meteorite showers but the grass was often damp. So now we can lay on the gabion benches instead. A few nights ago I watched 3 satelites glide across the dark night skies and saw a couple of shooting stars too. Our job, I thought to myself, our job here is done, what’s next?

Louis and Be, Essex