Last week some old friends came to stay and we joined them on one of the many daily seal trips to Blakeney Point. Home to the largest Grey Seal colony in England and in winter there can be about 2,500 pups. You will always be rewarded with close up views of the Seals with many swimming around your boat.

As it is with all places to visit the journey is as important as the destination itself. This is definitely the case when visiting the seal colony. You gather together (socially distant of course) by the staithes, or moorings, next to a winding muddy estuary out on the salt marsh. The early tours await the arrival of the incoming tide to fill this muddy gutter and as the departure time approaches everyone starts to think that the timetable was incorrect. Then with just minutes to go there’s a distinct rush of water and the cut starts to fill with an astounding speed almost as if a sluice had been opened but it is no sluice just the unwavering twice daily tide revisiting the marsh with some haste.

To abide by Covid 19 requirements all passengers had to wear masks and have their own sanitiser and must be able to climb into the boat without assistance from the crew. On the plus side the boats are all only half full to allow for social distancing which means a great view is even better!

Then as the tide is still pouring into the inlets we weave our way through the marsh, the scenery is beautiful and despite being at ground level we can see the best part of 5 miles both westward & eastward. 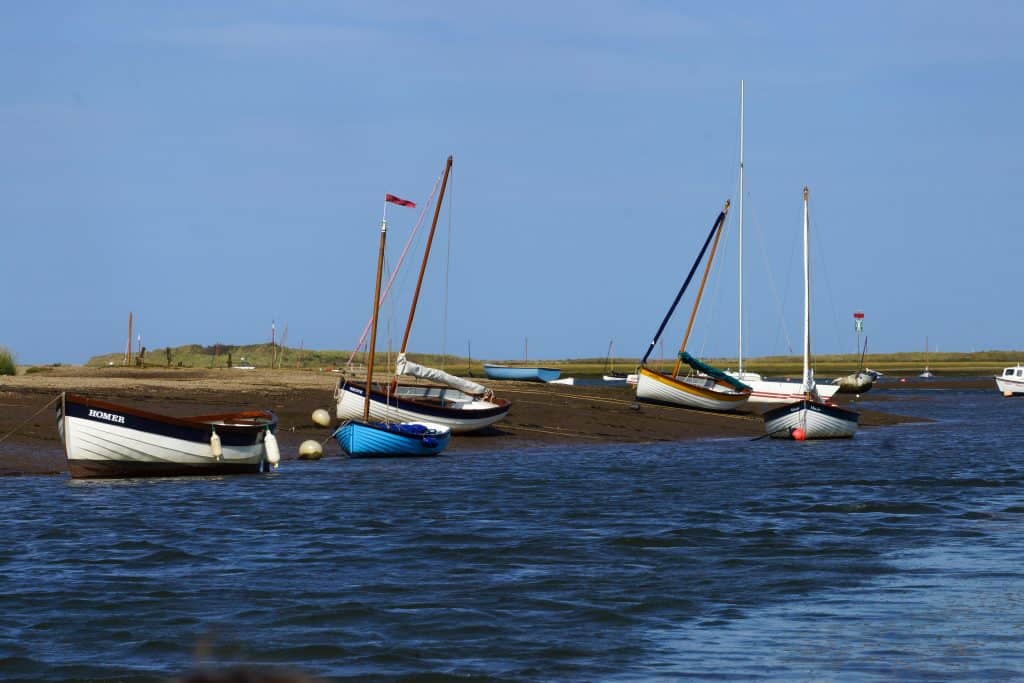 We meander along a small estuary which eventually opens up into a large lagoon full of moored boats. The water a little more choppy but protected from the North Sea by the 6.4km Blakeney Point shingle spit that has created this vast shallow lagoon. The boat staff are full of interesting information about all that you can see such as the old blue lifeboat station and the mini ark-like boat that is moored just in front of it. All the time bit by bit we get nearer and nearer to the spits end and the colony of Seals. 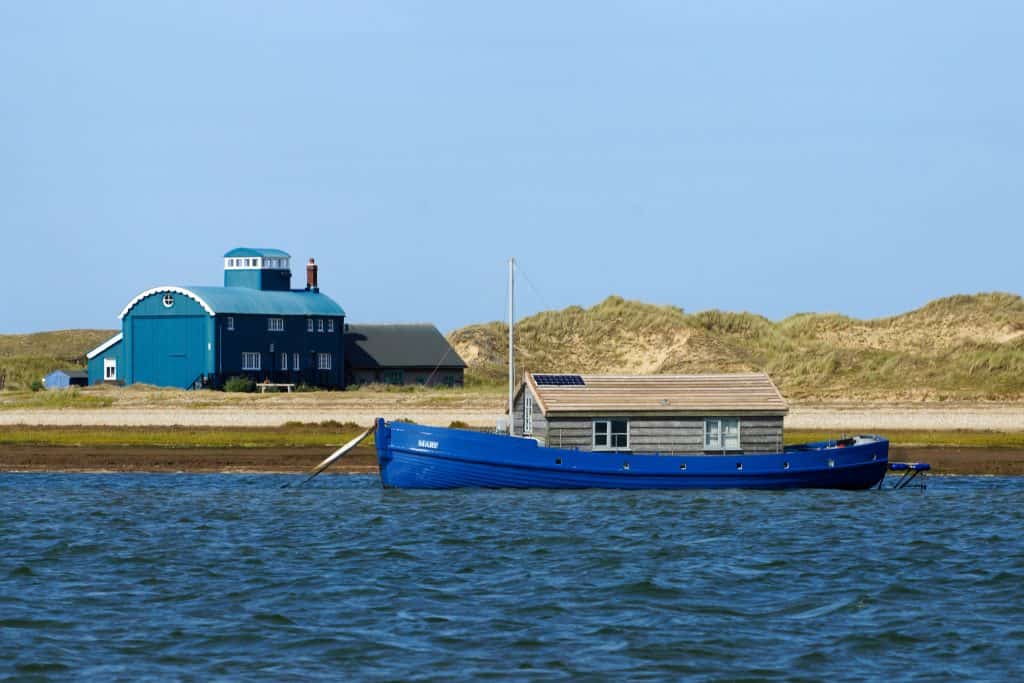 Our first sighting is a lone seal enjoying a little ‘me’ time on a vast beach all of it’s own, the cameras fire away, then one or two seals are spotted in the sea. 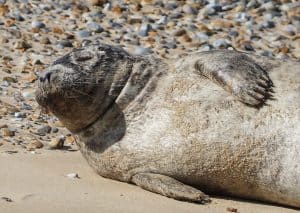 There are both Grey & Common Seals mixing quite happily, there’s safety in numbers, and as we follow the curve at the end of the spit a crowded herd of Seals come into view. 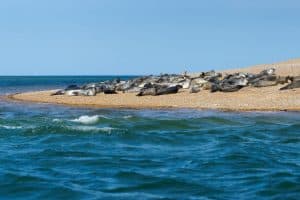 For the next 20 minutes or so we ferry around the sandbanks and beaches at the mouth of the bay on the edge of the North Sea whilst we are treated to fantastic up and close views of Seals resting, swimming, splashing, fighting (a little) and resting….mainly resting. 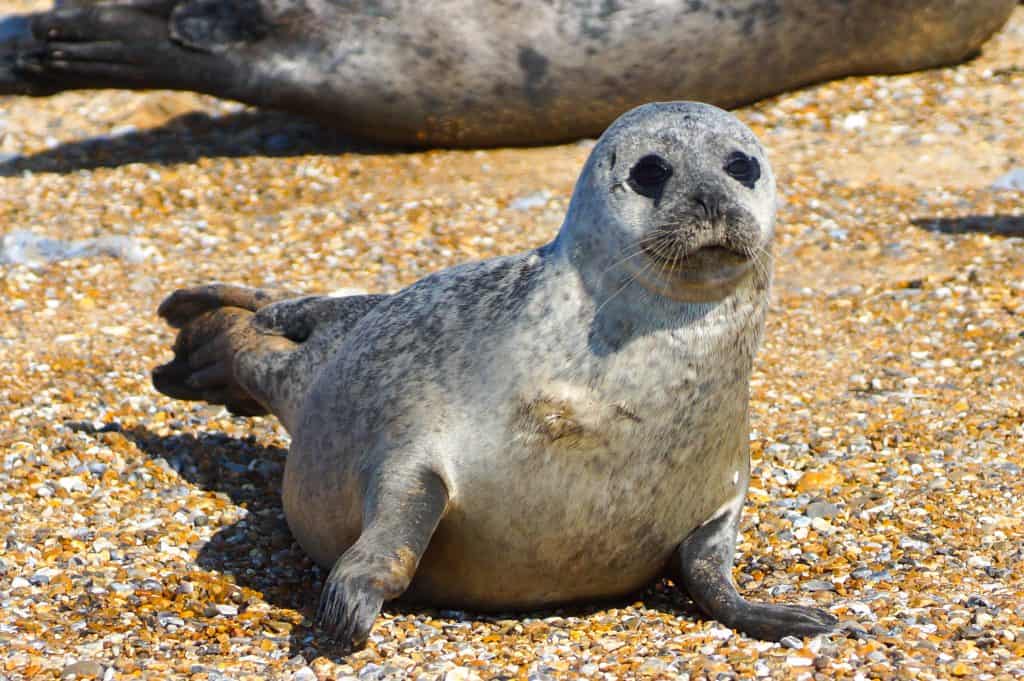 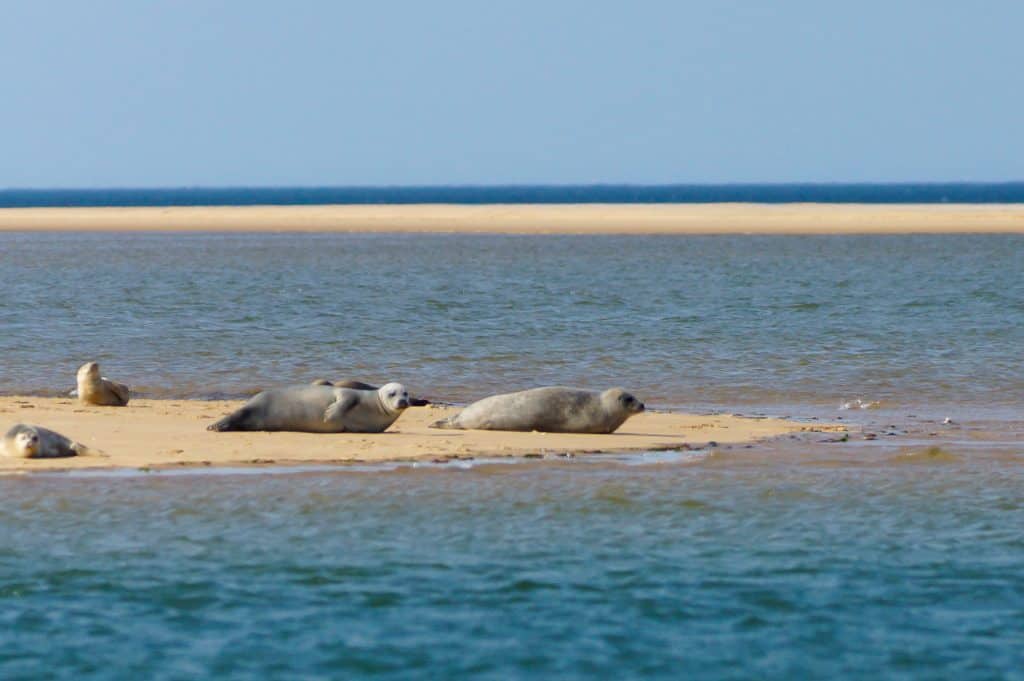 In 2013 a storm & flood washed about 2,000 Seals & cubs from these sandbanks and the National Trust believed that the mothers wouldn’t be able to pair back up with them and that the cubs would die. However within the week the  vast majority of cubs were successfully back suckling from their mothers although there were still many that  had to be taken to the rescue centre. 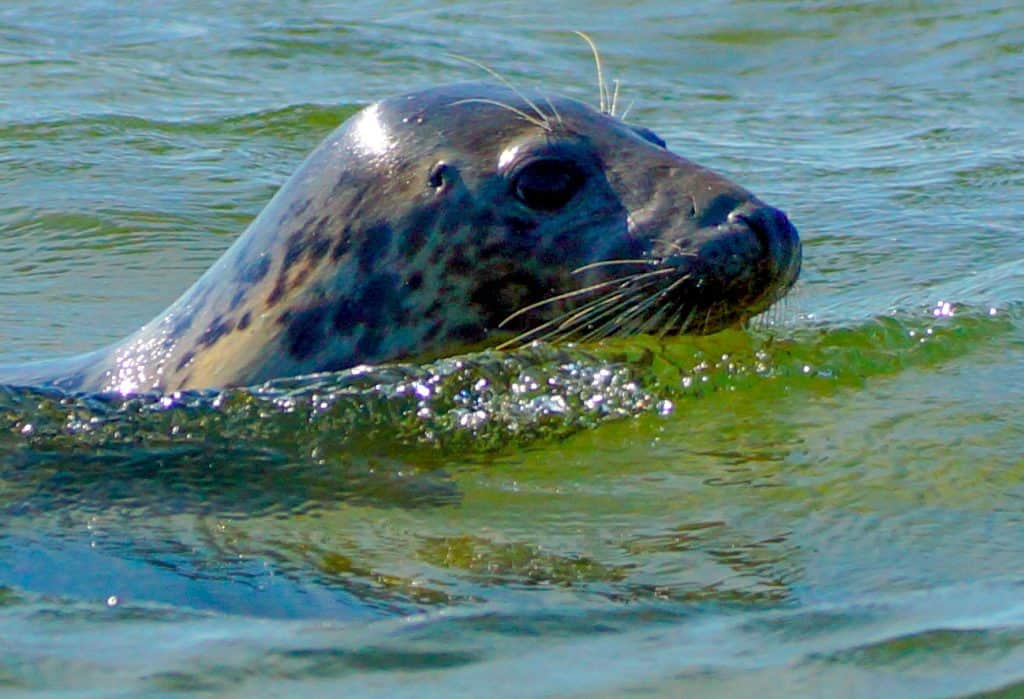 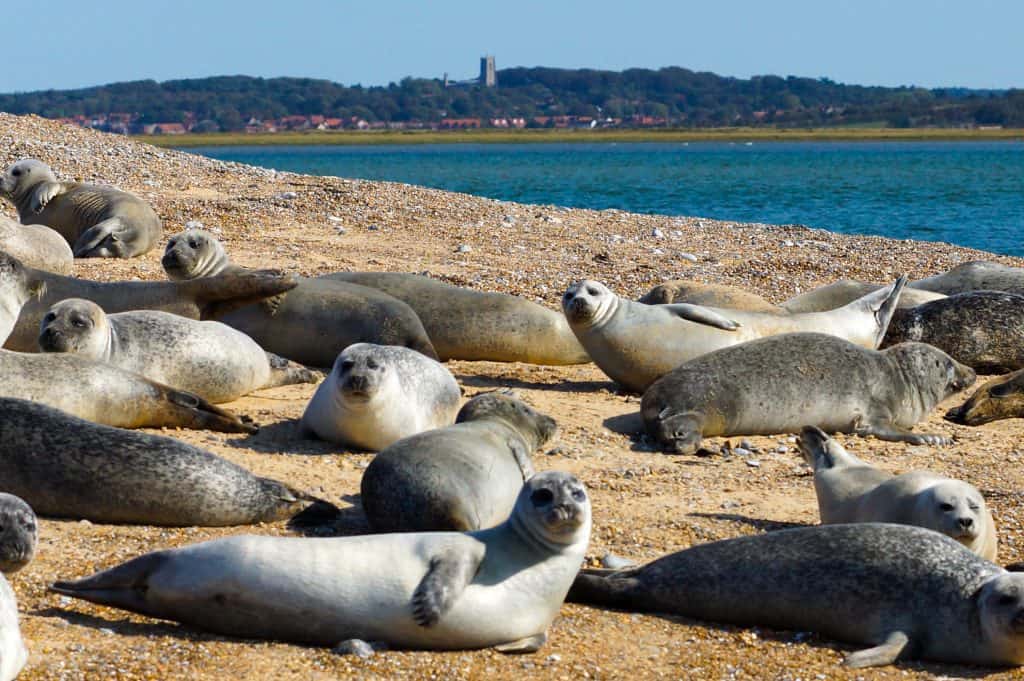 Two to three miles back on the mainland Blakeney Church tower stands tall. it is often open to the public and has amazing views of the marshes & little backwaters. It is also unusual as it has a smaller second tower that is believed to have acted as a kind of light house giving those at sea a navigable point to aim for. 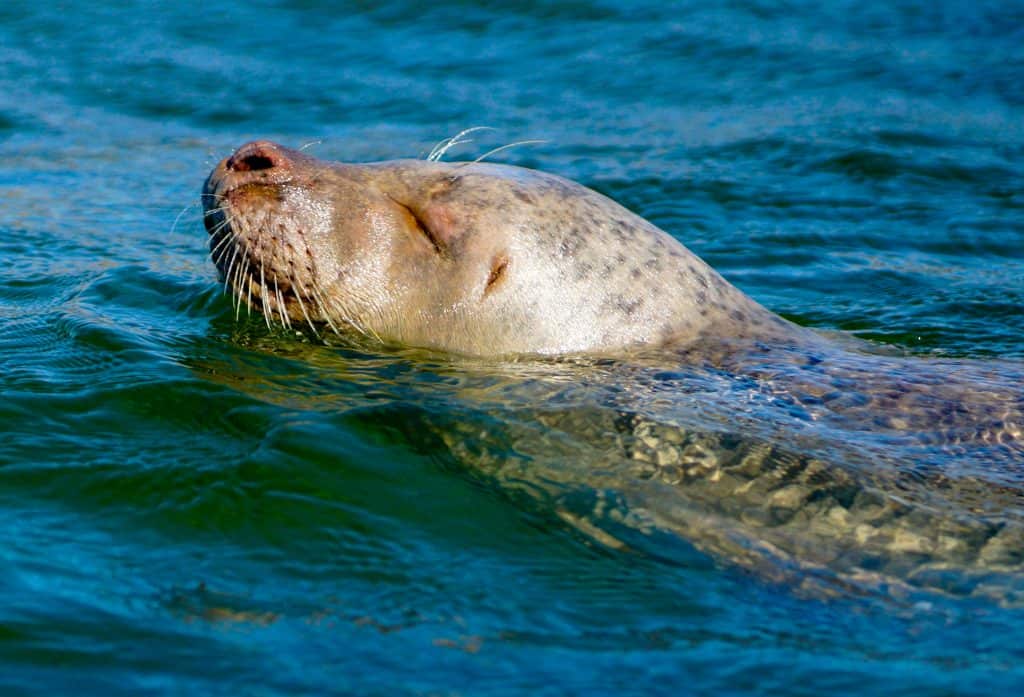 The Norfolk waters are so clear and as well as the massive Seal population it is fantastic for shell fish especially mussels. 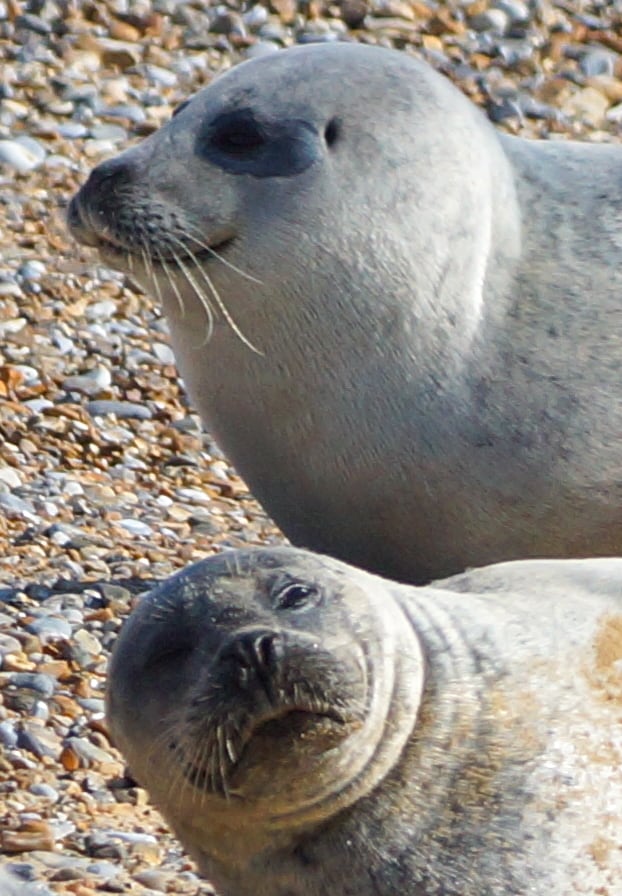 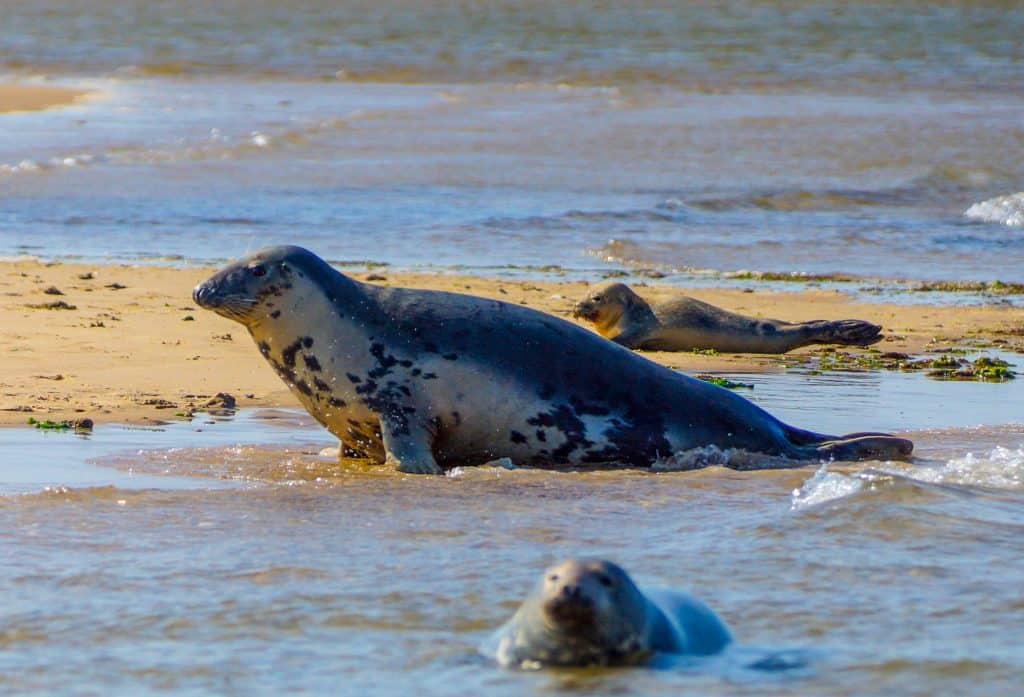 A cub stays close to it’s mother, there are no predators here which is the main reason that they breed here in such numbers. 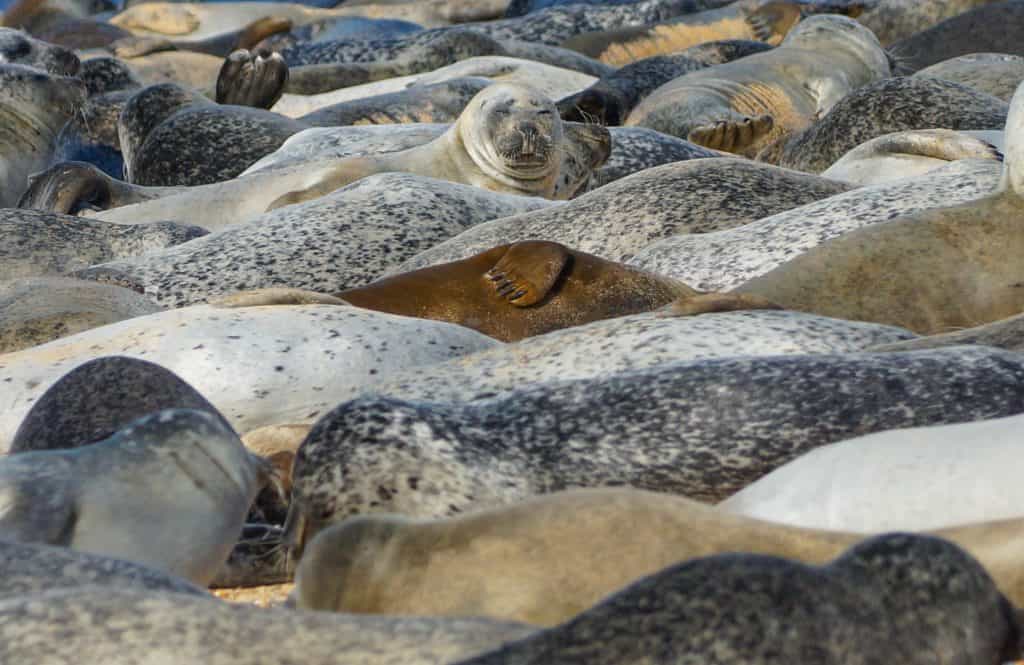 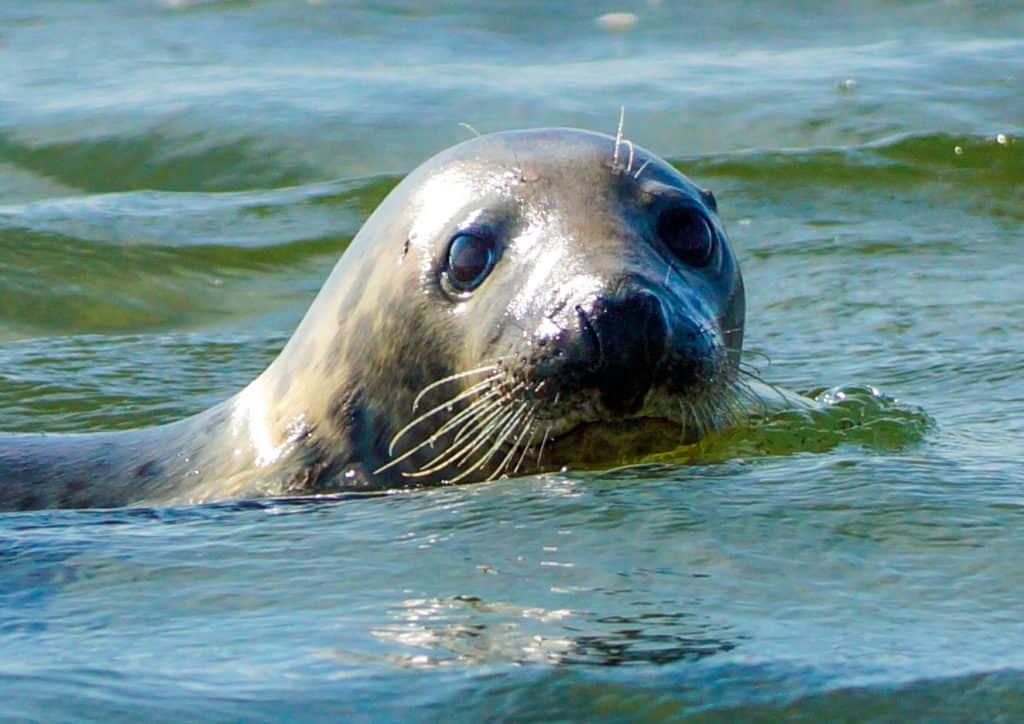 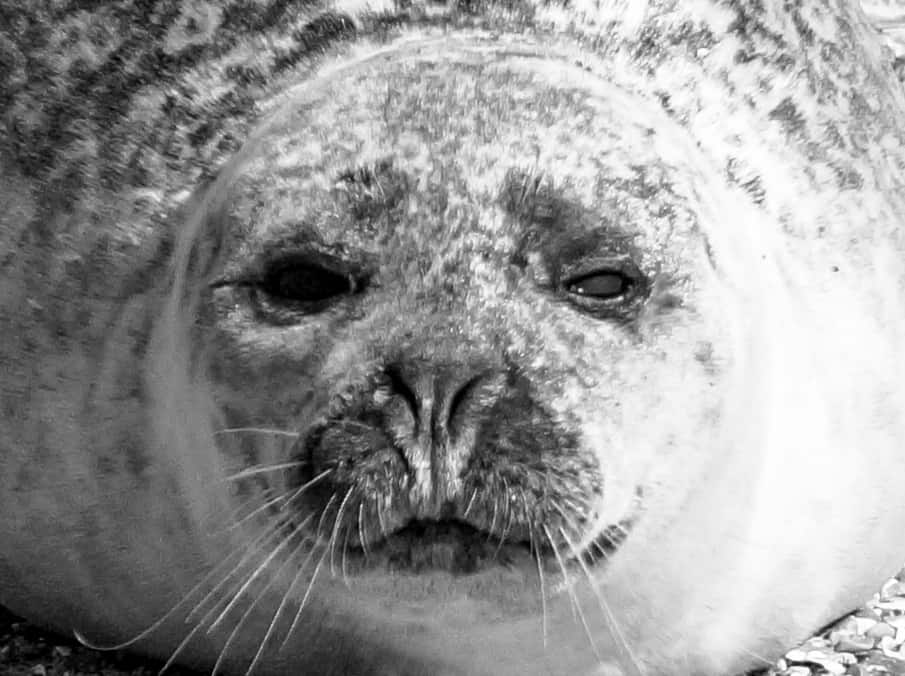 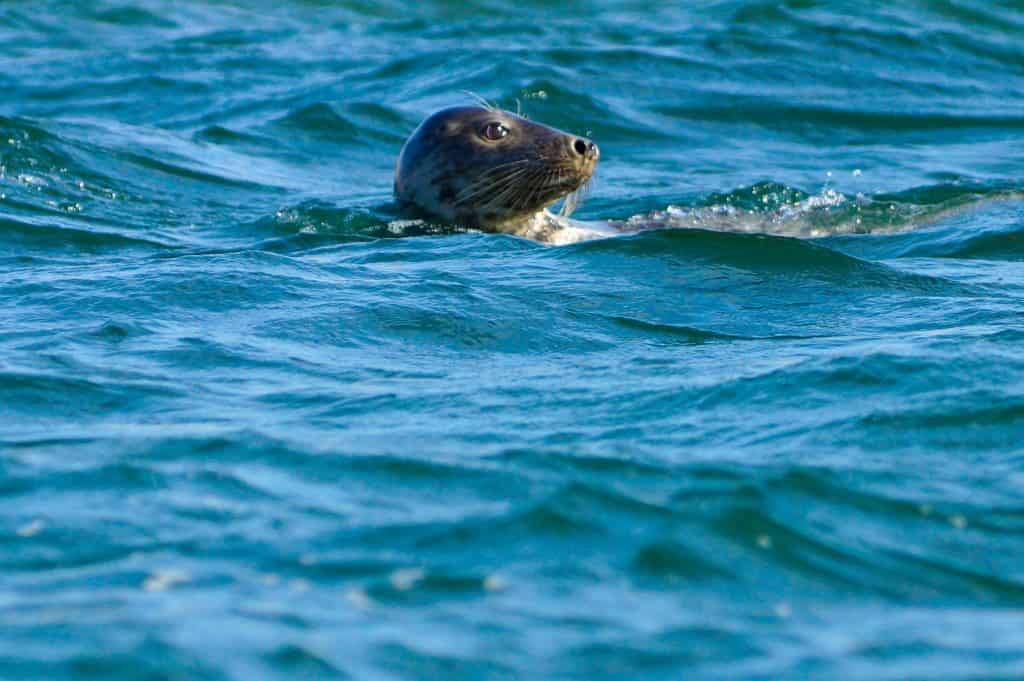 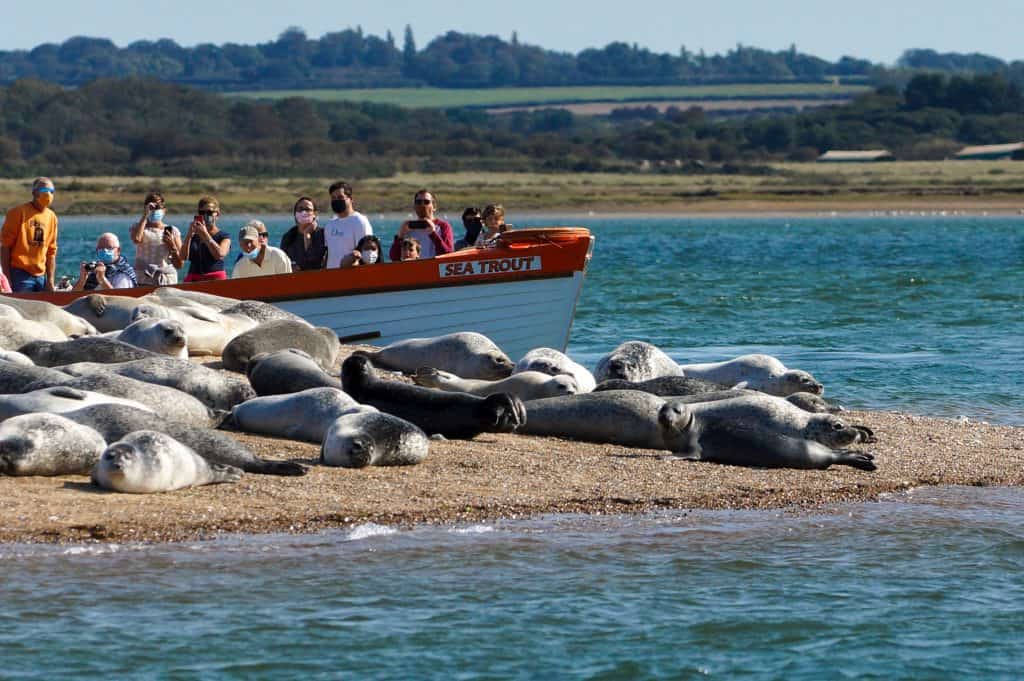 Despite the closeness you’ll see that the Seals are completely unfazed by the boats, people are not considered a threat to them. 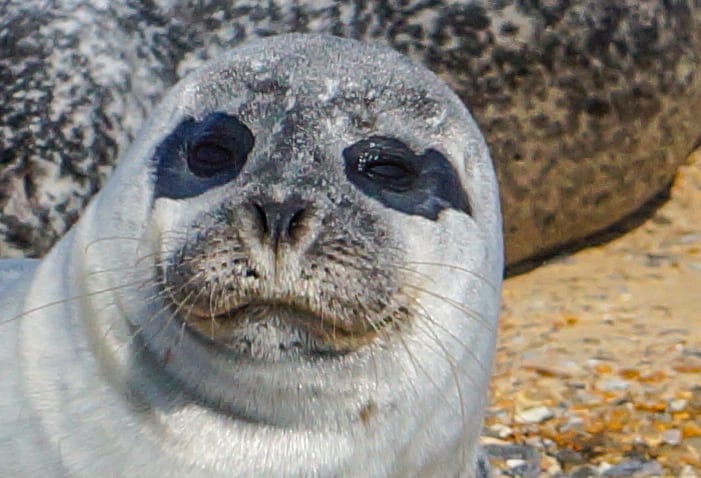 We nick-named this guy The Lone Ranger! 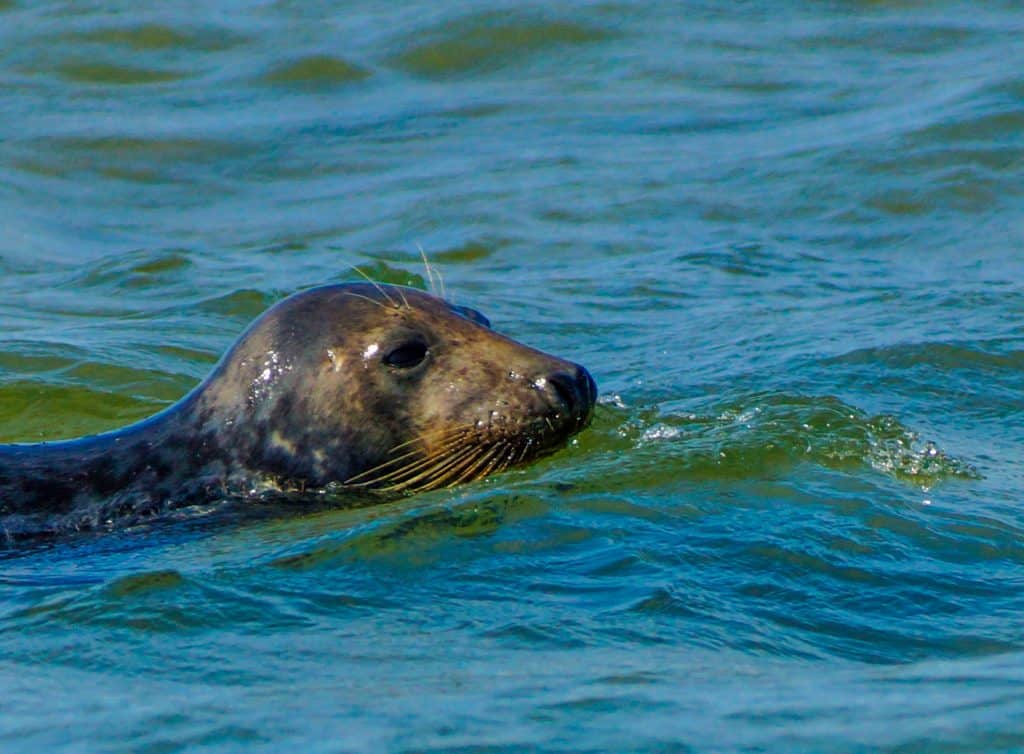 Then it is time to depart and as we headed back a myriad of small craft are coming out to sail on the high tide. The quay becomes busy with activity of boats being launched, it’s a real hub-bub and makes for a good few hours just people watching. soon the tide will recede the little boats and the tours will come back and moor and all the water folk will go home. Then whilst they settle and relax back at home the marsh will be left with a few walkers taking to the coastal paths, a few hundred boats beached on a sticky brown mud estuary with just the sounds of the Curlews, Lapwings & Oyster Catchers to keep them company until the next day-time tide awakes the tourists & boaters.

It was, as my Grandmother used to say, a truly ‘smashing’ day and I urge you all to break away from your shackles and head to Norfolk for a well earned break and a little of Norfolk’s rejuvenating qualities & most of all just come and Slow You Down a tad. 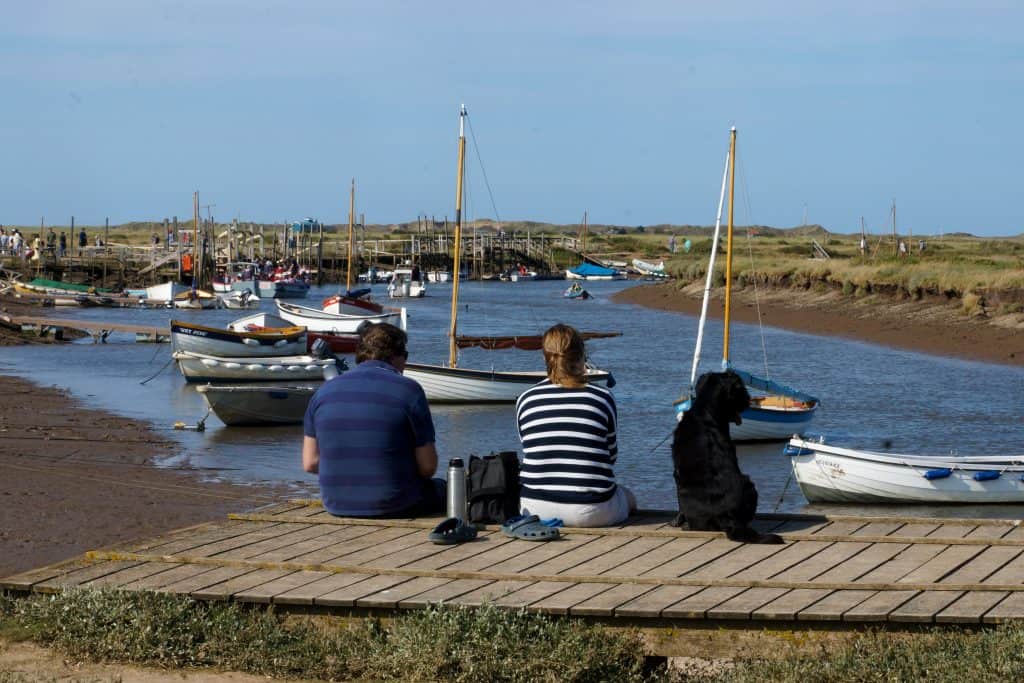 Honestly you’ll be all the better for it.

Remember to book well ahead as time slots will sell out if you leave it until you actually arrive in Norfolk.

Faultless in every way. Thank you for making our stay so enjoyable.